Be A Happy Warrior 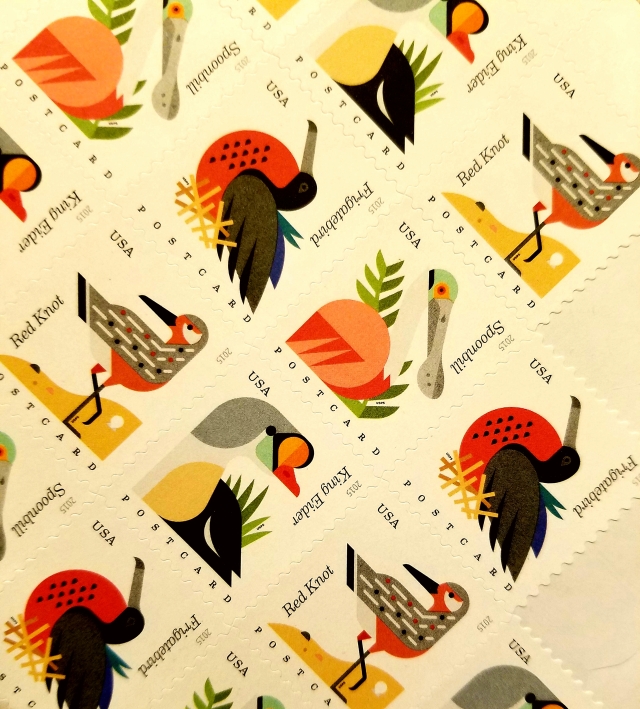 After an hour, I gave up trying to call Senator Chuck Schumer. His D.C. number played its monotonous busy signal to my wide-eyed young Android, who had never heard such quaint music, and the voicemail boxes at three of his regional offices were equally overwhelmed. So for the third time in twenty-four hours, I took a few minutes to write a Senator a postcard.

Vote No on the nomination of Jeff Sessions, I wrote him tonight. Yesterday, I asked him to vote No on Betsy DeVos. I have the subjects of twenty more postcards planned, and every day, the unrelenting horrors of the new Administration give me reason to add to the list. Don’t shut down the EPA. Don’t erase disabled people from the White House website in preparation for God only knows what other erasure. Don’t take my daughter’s health insurance away, and with it, the treatments she needs to stay alive and strong. Don’t take my LGBTQ friends’ marriages and families and human rights away. Don’t rob black and brown people of their right to vote. Don’t jail and deport our immigrant neighbors and friends. Don’t allow the President to use his office to enrich himself at the expense of the people. Don’t declare martial law in our cities.  Don’t  Don’t. Don’t. Don’t. Don’t.

But the Sessions vote may arrive sooner than my postcard, so I wrote Senator Schumer an email, too. The former Congressional staffers who wrote the Indivisible Guide advise us to make emails personal for greater impact, so I got personal.

Be a happy warrior, Senator Schumer, I wrote. You may never again get the opportunity to fight this hard against people who deserve it more. Your constituents and your country are depending on you!

And as soon as I wrote it, I knew it was true. (Writing is funny that way–non-writers believe that you think a thought, then write it down. Writers know that writing is thought.) To survive this, we have to fight it, and we have to fight it with fire in our blood and joy in our eyes. We have to love fighting. This, not the ethics of nonviolence, is the subtext of this week’s Nazi-punching debate. People want to enjoy the pain in their fists. They need to know they’re still alive.

I’ve been as miserable as everyone else I love, plus ill. I couldn’t go to any of the Women’s Marches. Too sick to go to work yesterday, I mainlined the bad news all day long until I was exactly as terrified as Trump and Bannon want me to be.

The government as I understood it crumbled every hour, with each new Executive Order. Its foundation was not built of laws, but of norms, and it took only one would-be authoritarian a few days to show the world how fragile the structure had always been. 114 Congresses have come and gone, and not one thought to write laws preventing what is happening to us this week.  The rugged individualists would gather in the City on the Hill and select the leader God would have picked Himself, if we hadn’t invented democracy. If this Administration is the end of us, our faith in our own mythology is every bit as much to blame as Vladimir Putin’s hackers.

The more I saw, the less I could breathe.

But late in the afternoon, several friends asked for my list of postcard ideas. Rather than making the post public, I created a Facebook group called Postcard Riot, where people could share ideas for activism they could do from home. I invited a few dozen friends, posted my list, and watched the group grow to 340 members, most of whom I don’t know, posting information about postcard parties in their homes and places or worship, questions about how best to influence representatives, issues they wanted to get active about, and pictures of their postcards.

By the time I did that and wrote the first few postcards, I started to feel a little of that Nazi-punching energy pulsing through me.  I’m not in a position to punch anyone, and if my health doesn’t improve, I’m not going to be attending many marches, but I can write, network, research, and encourage. I can remind myself and others that we can do more than worry, complain, and grieve. We can, if we like, write a postcard.

I’m late to this work, and embarrassed by my lateness. Alec Mento, who writes the Thieves in the Temple blog, has been doing this work faithfully, Administration in, Administration out, for years now, crafting daily posts about peace, the environment, labor, education, and social justice issues, with simple, practical steps anyone can use to take action. I have always read and appreciated Thieves in the Temple, and admired Alec’s discipline and commitment, but seldom took any of the actions he recommended. If Democrats were in office, I figured they would take care of things, and if Republicans were, I figured there was no point. I hope never to make that mistake again, and I don’t think I ever will.

If this moment is not the end of the Republic, then it’s only because we decided it’s not the end, and we can only make decisions like that about something that belongs wholly to us.

So if it belongs to you, take it up. Speak out for it. March for it. Knit for it. Draw for it. Chant for it. Pray for it.  Cook for it. Punch for it. Call and write your Representatives on its behalf. Donate money, if you can. Run for office, if you can. Never be silent. And whenever you  have sufficient strength and moxie, be a happy warrior. 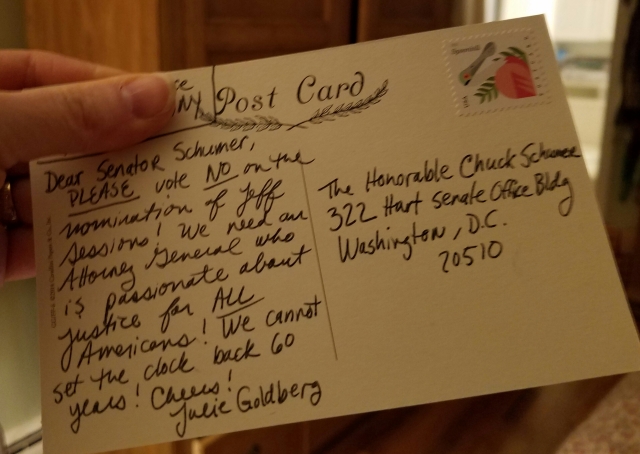 Julie Goldberg has lived a life entirely too entangled with books. She is a school librarian, former English teacher, compulsive reader, occasional jazz singer and the author of Lily in the Light of Halfmoon. You can email her at perfectwhole@gmail.com and follow her on Twitter @juliegoldberg.
View all posts by Julie Goldberg →
This entry was posted in politics and tagged activism, advice, politics. Bookmark the permalink.

2 Responses to Be A Happy Warrior