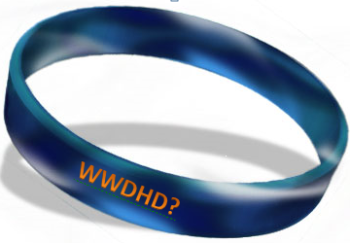 In its 2013 summer fiction issue, The New Yorker magazine ran a Dashiell Hammett story called “An Inch and a Half of Glory” written in the 1920s, but previously unpublished. Parked at the station, waiting for my daughter’s train, I thought I’d absorb ten minutes with a little atmospheric mystery. Within a few paragraphs, though, I was digging in my handbag for a pen to underline and notate. His style, spare and pure as the soul of a monk, demanded attention as it deflected it. I wanted to know how he got away with it.

He is a master stylist, up to far more tricks than I can identify, but in his spirit of concision, I offer just a few tenets of Hammettism.

Hammett expects readers to pay attention. He doesn’t waste precious words telling us what we ought to be able to figure out for ourselves.

In the first part of the story, a man named Earl Parish rescues a child from a smoky building. The word “fire” makes no appearance. Is the building, in fact, on fire? Here is the first line of the story:

Out of the open doorway and an open second-story window thin curls of smoke came without propulsion to fade in the air.

Hammett invites you to draw your own conclusions, particularly after Parish enters the building.

Earl Parish went up the brass-striped steps. The smoke thickened as he mounted, but was never dense enough to make advance difficult. He saw no flames.

A hero rushes into a burning building to save an innocent, but what if the innocent needs no rescue? Is the man still a hero?

The second section of the story finds Parish at work. What does he do?

At his desk the next morning Earl Parish searched the day’s papers. In the Morning Post, he found an inch and a half of simple news that a fire of unknown origin had been subdued with slight damage after a child was carried to safety by Earl Parish. He folded the account into the center of the newspaper and put it out of sight.

Between the departure of No. 131, southbound, and the arrival of No. 22, a train announcer came to Earl Parish’s window and grinned at him over the sign that said “Information.”

If we can’t figure out that he works at a passenger information window in a train station, Hammett would prefer we not read his stories. But how important a person is Parish in the hierarchy of the train station?

The station employees with whom he was intimate joked about his deed. The more important employees–baggage master, stationmaster, chief dispatcher–congratulated him solemnly, as if on behalf of the company.

Hammett does not intend to spell it out.

Every “Rules for Writing” book and website urges the annihilation of “to be” verbs. Students and developing writers find the advice precious and impractical, but Hammett’s prose shows what one can get in exchange for is, was, and are. Describing the child the crowd observes in the window of the (possibly) burning building, Hammett writes:

The face held puzzlement without fear.

Lesser mortals would have written, “The face was puzzled, though not fearful,” but Hammett neither wastes a word nor positions a dull placeholder of a verb where he could put a strong one. What does it mean for a face to “hold” an emotion? The child seems immobilized at the window, perhaps holding himself together. Hammett has taken the word “child” out of the sentence, having used it once in the paragraph already, and forces our attention just to what the crowd can see: a face in a window.

Hammett doesn’t do weird, writerly acrobatics to avoid “to be” verbs, though. Where “was” cannot be replaced, he uses it, but balances it with vivid language elsewhere in the sentence.

He himself was a cog, true enough, but with the difference that on occasion he could be an identity.

3. Evoke, do not state. Trust the reader to do the work.

Hammett takes “show, don’t tell” to a higher level in this paragraph, in which the men on the street have noticed the child in jeopardy and one  has called the fire department. They discuss how quickly the firefighters will come and how easy it will be for the professionals to rescue the child with a hook-and-ladder truck. Then, the men stand on the sidewalk, staring up at the child.

Feet shuffled on the sidewalk and gazes left the upper windows to fasten on the smoking doorway. No one answered the man who had spoken last. After a moment, his face reddened. Earl Parish found his own cheeks warm. Looking out of the corners of his eyes at he faces around him, he saw more color than before. His glance met another man’s. Both looked quickly across the street again.

The men are so ashamed of their cowardice that they blush en masse, silent, too embarrassed to look at each other. Words Hammett refuses to use: blush, guilt, shame, coward, courage, embarrassed He drops a “reddened,” but that’s it. The rest, he trusts the reader to divine.

4. If you must use an expletive construction, bury it.

Although sometimes unavoidable, expletives are considered bad style because they highlight placeholders (“there is,” i.e.),  burying the subject and verb deep in the sentence.

After the second section of the story, in which Parish is recognized for his possibly heroic actions, the third marks the end of his brief celebrity.

Then the fire was as if it had never happened.

Colloquially, we would probably say, “Then it was as if the fire had never happened,” but English contains few more exciting words than “fire,” and Hammett refuses to shunt it to the back of the sentence. The syntax also mirrors Parish’s consciousness, in which the fire is still front and center, even as the rest of the world has forgotten all about it.

5. Write sentences that shock readers into a new perception.

By the end of the story, Parish’s misplaced sense of superiority has ruined his life. Hammett wants us to see Parish from the outside this time, as others see him, since his self-perceptions have proved so disastrously inaccurate.

Into this establishment one afternoon came a short, sturdy man of thirty or so, inordinately dirty-faced and shabby. He had no hat, and some of his hair seemed to have been eaten off. A smudge was where one eyebrow should have been. He walked unsteadily. His red eyes had the inward hilarity of a drunken philosopher. But he did not smell of alcohol–rather, of fresh wood smoke.

He seems drunk, but isn’t. He’s just run into another burning building, a real one this time, and saved no one. The drunken philosopher sees the ugly truth of the world and finds it sadly hilarious. Parish, drunk on the absurd, deplorable truth of himself, needs to get as far away from the city as he can. He has come to this office to find out how to go to sea before the morning papers reveal him to the world for the fool he now knows himself to be.

And now the notion of “the inward hilarity of a drunken philosopher” is with me for the rest of my days.

6. Do What Dashiell Hammett Would Do self-consciously and with perfect control.

Lest we suppose that Hammett is some kind of unconscious, natural genius whose stylistic gifts were granted by an unjust God, he tips his hand.

When Parish begins to resent those who fail to appreciate how special he is, he thinks:

The last drop of ancestral venturesomeness had not been distilled from his blood. He experimented with this thought, evolving a sentence he liked: “All their ancestral courage has been distilled by industrialism out of their veins.”

I laughed aloud at this one, hearing Hammett snigger back at me. The first iteration of the thought is how Hammett would phrase it; the second, how Parish does. Hammett’s is evocative (“the last drop,” “venturesomeness,” “from his blood,”) where Parish’s is pedestrian (“all,” “courage,” “out of their veins”). Parish explains (“by industrialism”) where Hammett simply observes and allows the reader to draw conclusions. Hammett’s version is a pure distillation of Parish’s clunky one, and I doubt the presence of the word “distilled” is any accident.

So much more, with so many fewer words than I do.

Julie Goldberg has lived a life entirely too entangled with books. She is a school librarian, former English teacher, compulsive reader, occasional jazz singer and the author of Lily in the Light of Halfmoon. You can email her at perfectwhole@gmail.com and follow her on Twitter @juliegoldberg.
View all posts by Julie Goldberg →
This entry was posted in Criticism, Writing and tagged advice, Dashiell Hammett, editing, expletive construction, revision, show don't tell, style, syntax, The People's MFA, to be verbs, writing. Bookmark the permalink.

13 Responses to What Would Dashiell Hammett Do?