Posted on December 1, 2012 by Julie Goldberg 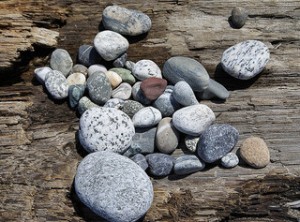 At a workshop I attended recently, Emmy Laybourne, author of the Monument 14 series, shared a rule, well-known among screenwriters, that I had never heard before:

“Chase your character up a tree and throw rocks at him.”

It’s smart advice: put your character in a tough spot, then multiply his problems. You’ll let him down from the tree eventually, but don’t make it too easy. Create doubt about whether the character can succeed, or even survive. The more he suffers, the more desperately the audience will want him to get down from the tree safely, and the more they will enjoy his eventual triumph.

Action, thriller, and mystery authors have no problem following this rule. They torment their protagonists pitilessly. Those writers aren’t happy until their main character is reflecting ruefully, while suspended by flimsy ropes over a vat of boiling oil in the sub-basement of the psychotic killer’s apartment building, that the guy’s idiotically contrived “maniac laughter” is going to be the last sound she hears before dying in agony.

I’ve been struggling with this rule in the novel I’m working on. Having lived with these characters for a long time, I feel great affection for them and want them to be happy. Some are based on people I know and love, and I don’t want bad things to happen to good people. This misplaced protectiveness leads to narrative mistakes. In initial drafts of new chapters, I keep finding that I’ve mitigated the characters’ problems, shooing them up saplings, lobbing only Nerf rocks, and letting them shimmy down far too easily.

The emotional climax of the novel, the section I just finished writing this week (bringing the word count past 100,000!), is a fight between two young lovers, followed by a reconciliation and a series of revelations. The quarrel is an existential threat to their relationship, and for the main character, it jeopardizes any hope she had of ever connecting with another human being. For the story to work, readers have to wonder if she has learned anything over the course of the story, whether she has developed the strength to reach out, to trust someone who has done everything possible to earn her trust, to risk telling a secret she had hoped to keep forever. And in order for readers to wonder, I have to keep the characters apart for a while and let them stew.

But in  the early  drafts, I kept getting them back together. They texted apologies, acknowledged responsibility, explained their points of view, sought to understand. Within 24 hours of the fight, their conflict was resolved, all blunders forgiven, their love and trust deeper than ever.

And all that evolved, mature behavior made for terrible storytelling.

In later drafts, I allow them to endure rage, regret, and depression for three days. They can’t sleep. They can’t eat. They have no idea how to mend what has been broken. The girl nearly drops out of reality in her grief. The boy can’t concentrate on anything but his confusion and longing. Three days were as much as they or I could bear, but the chapters were vastly improved by prolonging and deepening the young couple’s anguish.

What made this so difficult for me was the gulf between my role as a writer of this story and my roles as a mother, a wife, an educator, and as all the other mature, grownup characters I portray in real life every day. In our relationships at work, at home, and in community, responsible adults try to cool the temperature, reduce the drama, lower the stakes, smooth the rough places. We eke out compromises. We make Plans B, C, D and E, in case Plan A doesn’t work out. We try not to get too attached to Plan A, nor too disappointed when it fails.

We try not to let things matter more than they should. We don’t want every marital spat to be another battle in the twenty-year covert war over which partner cares most about the relationship, and it would be nice if every time we sliced a piece of cake for children to share, it didn’t become a verdict on which child mommy loves more.  We try to lower the stakes–it’s only cake, kids. We try not to have winners and losers at home or at work, so we try to find ways for everyone to win. Even people so confounded by the sociopathic behavior of their friends and relations that they write to Dear Prudence about it ask her what they can do to make everyone, even the sociopaths, feel okay and get along pleasantly.

For fiction to draw a reader in emotionally, though, the outcome of a conflict–even a quiet, interior conflict–must matter to the character as much as life itself. The smaller slice of cake really does have to indicate an inferior and insufficient love. What the character desires, he must want so badly that his life can never be truly right without it. Sometimes he gets what he needs, and sometimes he doesn’t, but readers can’t care about it if he doesn’t. Narrative conflicts must have winners and losers, and the losers have to lose something important to them, if not everything.

In my professional and personal life, I work hard to find outcomes with the greatest good for the greatest number of people, as often as possible. But my writer self needs to let characters bleed, struggle, and desperately desire all the wrong things without lifting a finger to rescue them. I must not give them sound advice, and they must reject most sensible advice they hear. Characters, unlike my children or my students, need to learn everything the hard way.

I write at night and on weekends, after long days of smoothing paths, dispensing counsel, minimizing conflict, and cushioning falls. If I see someone who has been chased up a tree, I help her down. But I have to leave those responsible grownup habits behind if I hope to write a novel that anyone will want to read.

Julie Goldberg has lived a life entirely too entangled with books. She is a school librarian, former English teacher, compulsive reader, occasional jazz singer and the author of Lily in the Light of Halfmoon. You can email her at perfectwhole@gmail.com and follow her on Twitter @juliegoldberg.
View all posts by Julie Goldberg →
This entry was posted in Books & Libraries, Motherhood, Volta, Writing and tagged advice, books, Bothmind, motherhood, wisdom, writing. Bookmark the permalink.