Common Ground in the Culture Wars

Because we’re addicted to silly arguments and trumped up controversies, and because the most sophisticated move we seem able to make as a culture is forcing every issue into two, and no more than two, warring camps, lately we’ve been having a fake fight about attachment parenting, set off by Time Magazine’s controversial cover photo. Is attachment parenting good or bad for children? For mothers? Is it feminist or anti-feminist? Is it crazy liberal or crazy conservative? That last one is the only question that seems to matter about any issue anymore, and those the only two available options.

But attachment parenting and what Peggy O’Mara calls “natural family living,” encompassing  practices such as homebirth, exclusive breastfeeding of infants, nursing past toddlerhood, babywearing, co-sleeping, eating organic food, homeschooling, preferring natural remedies over pharmaceuticals, and reducing or eliminating media from young children’s lives, to name a few, defy our Procrustean categories. You might imagine parents raising their kids this way to be hippies, but what are their politics? Can you guess their religious beliefs? You really can’t.

For me, attachment parenting was an extension of my romantic, lefty leanings: preferring the natural to the artificial, trusting my instincts over the conventional wisdom, believing that methods women had developed over millennia were superior to those dictated by the demands of industrial capitalism. I viewed the typical baby shower as a marketing scam whose purpose was to place the maximum number of expensive objects between new parents and their babies, and to indoctrinate the unborn into the cult of consumerism. But many conservatives are attachment parents, too. Dr. Bill and Martha Sears were evangelicals when they were raising their children and have a large fan base in that community, and I knew many Orthodox Jews practicing attachment parenting when my children were little, too. You don’t need to read Rod Dreher’s 2006 book Crunchy Cons: How Birkenstocked Burkeans, Gun-Loving Organic Gardeners, Evangelical Free-Range Farmers, Hip Homeschooling Mamas, Right-Wing Nature Lovers, and Their Diverse Tribe of Countercultural Conservatives Plan to Save America (Or At Least The Republican Party);  the title is surprising enough (if it disturbs you, I understand. I can’t assimilate the image of a Burkean in Birkenstocks, either). If the personal is political, these intimate choices about family life can spring from surprisingly diverse philosophies. 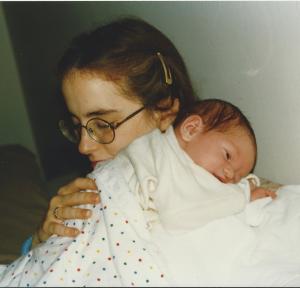 When I became a mother, I joined La Leche League, where I met several other women who, like me, were working from the Dr. Sears and Mothering Magazine playbook. We got to know each other at infant massage class, at Music Together, and at the distribution house for the organic co-op to which we all belonged. We became friends, taking our babies to parks and playgrounds together, watching them crawl and toddle around each other’s homes. We helped each other with childcare when needed, brought food when someone was sick, washed each other’s dishes and talked endlessly about the children: their sleeping, their eating, their digestion, their illnesses, their moods, their little accomplishments and naughtiness and obvious brilliance. As long as the children remained the sole topic of conversation, we agreed on everything.

One day, though, someone made a casual remark about her strong pro-life position that presumed we all shared her views. I exchanged an uncomfortable look with another feminist in the room. Should we let it go? Silently, we agreed to opt for honesty, then told her that we were both pro-choice feminists. Her distress was so painful and genuine that I was sorry I’d told her. We’d seen the pro-life stickers on her car and knew that she taught Natural Family Planning, but hadn’t known that she was opposed to all forms of birth control except for NFP (and how could we know? The other member of our group who loved NFP was a Pagan). She found it hard to accept that women who were so much like her, who mothered our children in such similar ways, who loved our own babies and other people’s, too, could condone what she believed was the murder of children. Her confusion and ours were understandable: why wouldn’t people who share such specific counter-cultural practices have similar politics?

The more we talked, the more differences we discovered. We all wanted to homeschool for different reasons, it turned out. I believed that homeschooling was more academically rigorous than any school could be, and that the vaunted socialization that occurs in schools was more harmful than helpful (I’ve since changed my mind). Another future homeschooler wanted to give her children a creative, hands-on education, free of the demands of schedules and standardized tests. Our pro-life friend wanted a Catholic education for her children, but believed the teachers and curriculum at parochial schools to be insufficiently orthodox. The only way she could be sure her children were learning the pure, rigorous Catholicism in which she believed, and nothing else, was to teach them herself.

Digging a little deeper over time, we discovered that while we all preferred whatever we considered “natural,” for her, “natural” meant “godly,” closer to the world as God intended it to be. The beliefs are different, but the practices are identical. Imagine two cars; one with a bumper sticker that says: “Breastmilk: Nature’s Perfect Baby Food;” the other with one that says “Breastmilk: God’s Perfect Baby Food.” Are they really so different? Can the owners of those two cars peacefully coexist in a playgroup?

I think they can, and that this little island of countercultural parenting reveals something worth knowing about the culture wars. Many thoughtful, intelligent people with all kinds of spiritual leanings and belief systems, all kinds of opinions about federalism and tax policy and the Constitution,  look at our popular culture, our political culture, our food, our lifestyles, the way we use and waste our resources of time, money, and attention, and conclude that something is seriously awry. They want to turn off the noise of what is out there and tune into the music of relationship, of family, of community. They think it might be wiser to create than to consume all the time, to do more with less, to eschew the temptation to entertain ourselves and our kids to death. Whether they start out motivated by environmentalism, religion, Burkeanism, socialism, logic, or just a longing for closeness and connection, many arrive at the same conclusion.

It’s fascinating that people with such radically opposed points of view, who may have been taught to think of people on the other side of the political or religious fence as stupid, evil, or both, may be raising their young children in nearly identical ways. Can we do anything useful with that common ground? The barriers we’ve built around red and blue, as if these categories were absolute and eternal, prevent sincere dialogue. I emailed Rod Dreher when his first “Crunchy Cons” article came out in 2003 and had an interesting exchange about common ground between crunchy libs and crunchy cons. The crunchies, we realized, agree about many of the problems, but would probably never agree about solutions. He was gracious and smart, and absolutely committed to his very conservative religious beliefs. I wish the political atmosphere had not grown so toxic, because without dialogue between people who disagree, we’re all just engaged in narcissistic celebrations of our own correctness that lead nowhere.

The debate sparked by the Time cover (which was, of course, designed to provoke exactly the reaction it did) reflects unease with the particulars of attachment parenting, but the mockery and disgust also mask hurt pride about the rejection of mainstream parenting. What’s wrong with Elmo and McDonald’s and formula and baby bouncers and keeping children inside where they won’t get dirty? It’s good enough for my kids. It’s easier to paint millions of parents who reject the whole package as freaks than to risk looking at the critique attachment parenting offers to the mainstream. Even when attachment parents don’t say a word, the implication of all their choices is that everyone else is doing it wrong. Their willingness to sacrifice so much to carry it out (those who can afford to, that is) shows that these choices matter. Their political, religious, and geographical diversity means that the critique is broad-based, and maybe, not so easy to dismiss.

It also means that they may be onto something.

Julie Goldberg has lived a life entirely too entangled with books. She is a school librarian, former English teacher, compulsive reader, occasional jazz singer and the author of Lily in the Light of Halfmoon. You can email her at perfectwhole@gmail.com and follow her on Twitter @juliegoldberg.
View all posts by Julie Goldberg →
This entry was posted in Criticism, Motherhood and tagged attachment parenting, consumerism, crunchy cons, culture wars, feminism, freaks, freedom, love, materialism, motherhood, natural family living, relationships, religion, rod dreher, soul, wisdom. Bookmark the permalink.

22 Responses to Common Ground in the Culture Wars